Home›Dog›Why Do Dogs Put Their Paw on You?

Why Do Dogs Put Their Paw on You?

If you have a pooch that always seems to put his paws upon you, you may be curious about the reason for this behavior. Why does a dog put his paws on you? Is there an explanation for it? Is he trying to tell you something? What can I do when my dog does this?

In this article, we’ll discuss this behavior and answer why do dogs put their paw on you and what you can do when your canine paws repeatedly.

Everyone who has ever owned a dog (a well-rounded one) would agree that they’re a delight to have around. They’re easy to love, loyal, and will more than try to compensate your care with their unwavering love and loyalty and, of course, their adorable behaviors. One of such behaviors common among our canine friends is pawing. It’s easy not to think much of it initially, but as it continues, you’ll have questions about why it is happening.

Before anything, understand that pawing is completely harmless behavior and that there are several reasons for it.

Also, understand that because our canines cannot talk, pawing is only one of the non-verbal ways they communicate to us and even to other animals around. And finally, because your pooch can paw at for several different reasons, it is essential that you learn to understand this communication method when your dog uses it. 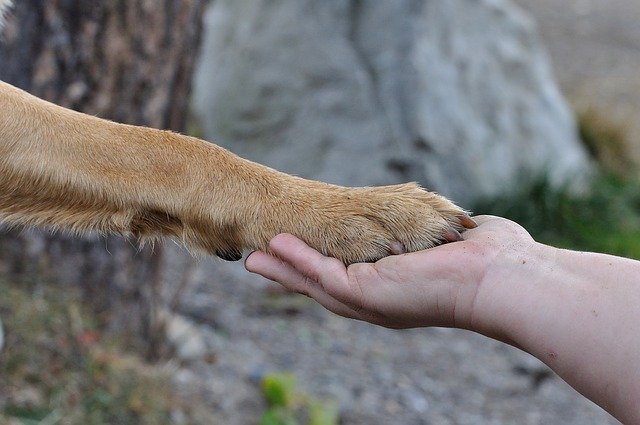 Possible Reasons Your Dog Is Pawing

As said above, there are several reasons a canine could put your dog puts his paws on you, and we’ll outline some of the most common ones below.

An Indication of Insecurity

One of the reasons your dog would raise a paw or put it on you is insecurity. A raised paw combined with other signs of stress and anxiety such as lip-smacking, yawning, and resting ears may be the only way your dog lets you know that he is feeling insecure.

Think back to possible reasons why he might feel that way, especially if there may be no apparent or immediate cause. Did you or anyone else in the household get into an argument? Did you yell or lose your temper with him? Did you just move with him into a new apartment or add a new or larger dog to your home?

In any of these situations, what you can do is brighten him up with a nice treat, have him play with his favorite toy, treat him to an outdoor activity he enjoys, or try to have him get along with the new addition. We have also provided some other tips on how to calm an anxious dog here.

He Wants You to Continue With a Particular Activity

Do you notice your dog paws after you give him a rub? If this is the case with your dog, it can be a way he lets you know that he enjoys your touch and wants you to continue.

This behavior is expected with dogs, and your pooch is no anomaly. Let him have the rub. However, you want to be sure that he isn't overdoing it. If he is, you should try as much as possible not to reward this behavior by petting him every time he does it.

His Own Way of Apologizing

If your pooch paws at you after you correct a “bad behavior”, placing a paw on you can be his own way of showing remorse.

This pawing is gentle, and it is usually done immediately after the correction, and they typically place the paws on your lap or leg. This is after they understand from your reaction that the behavior was “bad,” and you wouldn’t want it repeated. After the reprimand, your pooch likes to know that he is still in your good books.

Just like humans, dogs can sometimes express their feelings of love through touch. Your dog’s paws on you when you touch or give him a loving rub can be his own way of saying, “I love you too”.

Our dogs can also sense our moods and feelings, which is why they tend to become super-attentive and almost clingy when they observe that you’re in a bad mood. The gentle paw placed on your body can sometimes be his way of calming and reassuring you.

When our pooches want attention, placing their paws on us is one of the ways they show it. And as dogs are attention-loving animals, it should come as no surprise if they do it with regularity. If you’ve been busy and been unable to play with him or carry out the usual activities with him, pawing you is your dog’s gentle way of reminding you of his presence.

Of course, you should pay him some attention he desires. If your dog frequently paws to request your attention, it is likely because they have proven the behavior to work on you in the past.

When They Need to Play With Other Dogs

Humans are not the only ones that get the paws when our canines need something. Other dogs get the same treatment too. If your dog needs the attention of other dogs, you may see him paw the other dogs or even paw at the ground. This lets others know that it is time to play. If the other dogs are up for it, they’ll jump at the invite.

If your canine is in pain, he may paw because of it.  While a dog with painful paws will limp as a clear sign of discomfort, it's easy to miss if he looks or acts OK.

Your canine may place his paws on you if he wants you to take a look at the problem area and help make the discomfort go away. An injury isn't the only cause for paw pain. A stone wedged between the paw pads, or even a thorn can cause your dog discomfort. If your canine places his paws on you and you suspect a problem, promptly check to help or see a vet if required. 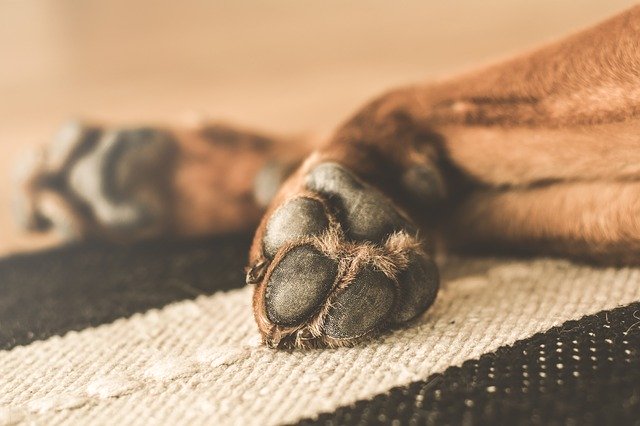 Stopping a Dog From Pawing at You

Again, this behavior is often harmless. However, you may not always be in the mood for a suitable response or have the time to respond to every pawing every time your pet does it. Another reason you may want to stop the pawing can be because of the dirty clothing after every pawing session.  Luckily, you can handle the issue effectively and calmly by practicing some of the following:

If your canine observes that he gets your attention every time he paws at you, he’ll be more likely to repeat it. When he paws at you, ignore and try not to make eye contact with him.

If he reaches for your hands, move it to a hard-to-reach position until he stops. And once he stops, give him a reward for it in the form of a treat, a rub, or his favorite toy.

Remain consistent. Paying attention to his pawing when he does it and refusing to pay the next time can confuse to your dog. Pick a stance, and stick with it until you’re ready to handle all of that pawing again.

Give Him What He Needs

If you notice your dog paws at you frequently even after you try to ignore him, it may be a sign that he wants something. Your dog may paw at you for any of the reasons earlier listed. If it is, then respond accordingly.

We mentioned above that dirt can be another reason you may not really look forward to your canine’s pawing. If that is the case, we share some helpful paw hygiene tips to ensure your pet’s paws are free of filth and safe enough to paw at you without a problem.

Pick a day of the week to check your canine’s paws thoroughly. This will help you spot minor cuts, ingrown and torn nails on time. You’ll also be able to find small objects between his paws that may have been causing the pawing.

To keep the nail length in check, we recommend clipping his nails after every bath; this could be weekly or fortnightly.  After bath trimmings are so you can clip the nails easier as they are usually softer then.

Massage a capsule of quality Vitamin E oil on your dog’s paws. This softens the paws and makes it a lot easier to trim and also comfortable when placed on you especially in dry weather.

Trimming Around the Paw

Carefully trim out matted hair around the paw with scissors. Remember only to use scissors designed specifically for dogs. Also, trim in small bits instead of cutting out large chunks to lessen the chances of causing him injury.

When Trimming, Positive Association Is Essential

Your dog has to associate paw trims and general grooming with a good time/reward. It is the only way to do a thorough job. Get him to calm down (never begin grooming before your dog is settled) before any step, and then reward him with a treat, praise, or a rub after each successful step. Don’t overdo the treats, though. Pet or praise him more.

Again, pawing is hardly ever a sign of aggression. We listed some possible reasons as to why do dogs put their paw on you and what you can do to stop him if needed. So, the next time your pooch exhibits this behavior, carefully watch his facial and body expressions. If you think the accompanying behaviors are harmless, they probably are.

You can either give him the attention he needs or ignore him after ensuring that he is alright and will do just fine without your attention. 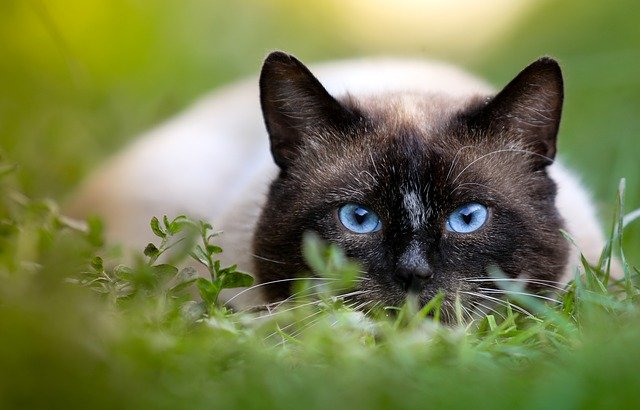 Why Do Cats Bring You Dead Animals?